THE LARGEST FISH IN THE WORLD ARE VISITING THE MARINE PARKS. IT’S WHALE SHARK SEASON!

THE LARGEST FISH IN THE WORLD ARE VISITING THE MARINE PARKS. IT’S WHALE SHARK SEASON!

If you want to see the largest fish in the world you should head to the Ile Cocos Marine Park today!

Yesterday, Sunday, in the afternoon, our Ile Cocos Team spotted their first whale shark for this season. They could not get a good picture because it did not stay long at the surface. In October someone shared seeing 12 of these fish near Conception Island, which lies close to the Port Launay Marine Park. 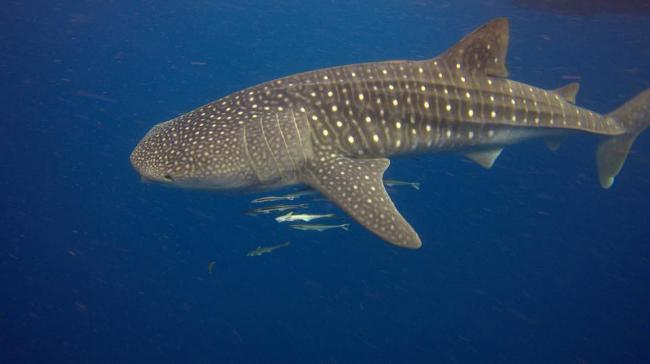 Whale shark, the largest fish in the world

In 2017 our staff from Ile Cocos Marine Park, near La Digue, reported sighting of whale sharks. A year later they reported spotting two of those giants and the tourists had the time of their lives swimming with the docile sharks.

The first whale shark to be described in the Indian Ocean was in 1828. Here in Seychelles ‘Whale shark season’ starts from September to November. Whale sharks (Rhincodon typus) “Sagren” in creole, are the world’s biggest sharks and thus the biggest fish. They can grow up to 20m. Whale sharks are found in all the tropical oceans of the world. The gentle giants are carnivorous filter feeders and feed on plankton.

To swim along with the biggest fish in the world is indeed a remarkable experience and to avoid disturbing the gentle giant it is recommended that:

• Not more than 10 swimmers be in the water

• Boat should remain at least 10m away from the shark

• Maximum time of interaction should be 90 minutes

• Swimmers should not restrict the movement or behavior of the shark

• Swimmers should not touch or ride the animal

• No flash photography be used with the animal.

Be a good citizen scientist and let us know if you spot the largest fish.