The PAREO Project means ‘the Coral Reef Heritage of the Indian Ocean in our hands’. The Project is an educational program created to transmit to young students scientific knowledge on coral reefs, raise awareness among children and go from knowledge to action to better protect the coral reefs. It is supported by scientists of the Research Institute for Sustainable Development (IRD) in France and by the Seychelles Parks and Gardens Authority (SPGA), to ensure the conservation and protection of the Marine Park and its coral reefs.

Currently, a group of primary school students from the Baie-st.Anne School are enrolled in this activity, and the Project is being implemented in the Curieuse Marine National Park which boasts spectacular coral reef life with a number of spectacular marine species. 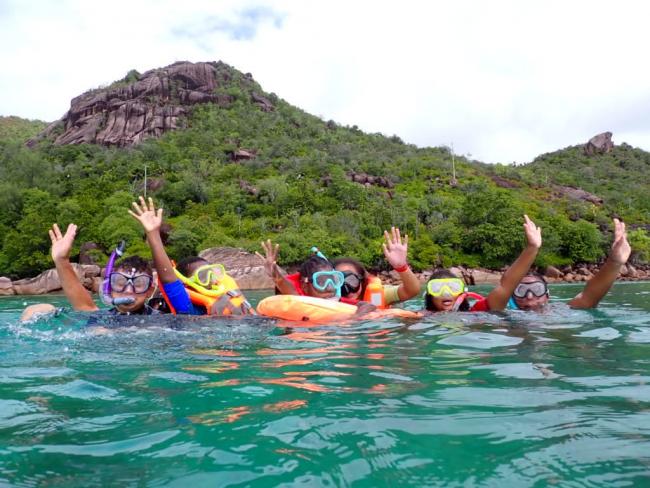 The PAREO Project looks at developing an Educative Marine Protected Area (EMPA) in the Seychelles. An Educative Marine Protected Area (or Aire Marine Educative in French) is a marine area within a marine park which is managed by the children. Similar to a Marine Park Manager, the children must familiarise themselves with the area, suggest a conservation measure to improve the ecosystem health status and evaluate the impact of the proposed measure on the natural environment and in the community. The Project aims at providing the children a very practical way to understand the management of the environment, discover the jobs of the manager, ranger and scientists and gain new knowledge the coral reefs.

The students have followed several class sessions and outdoor sessions to date, conducted by Ms. Lola Masse, a Marine Biologist from IRD, together with the Project Assistant Ms. Maria Brioche and SPGA staff based on Curieuse Island under the guidance of Island Manager Mr. Anto Suzette. The children have had the opportunity to interact with one another through the various learning tools and games being utilised under the Project. Activities include guessing the names of certain fish or species which are found on the coral reefs. To facilitate the learning process and ensuring that all students grasp as much as they can, the learning materials shared are both in English and Creole. Outdoor sessions involve discovering the Curieuse Marine Park and snorkelling along the coral reef for the students to see themselves the stunning underwater ecosystem.

The EMPA is not official and is not recognised per se by law, however it is just a territory that the children can use for their own exploration. After a full assessment of the Marine Protected Area(MPA) by the children in collaboration with the scientists, the health status, the human-use and the existing or potential threats are described. Once the Project reaches an end in late July a restitution is to be organised to exhibit the work done by students and an “EMPA Council” will be setup, allowing the children to share their experience with the Marine Park team, the decision-makers and the local community.

The PAREO initiative has been practiced by many other schools in France and the French overseas territories. The first phase of the PAREO project was implemented in 2019-2021 in three islands linked by the Mascarene plateau, namely Mahé-Seychelles, La Réunion and Mauritius. To our understanding, the EMPA of Praslin will be the first to be implemented outside France and its overseas territories.

This year’s Project in Seychelles, began in late May 2022 and will end in July 2022. If all goes according to the plan, Prince Albert of Monaco is to attend the official inauguration of the EMPA in October 2022.